Coinbase wallet is an easy-to-use, secure mobile bitcoin wallet that lets you send and receive bitcoins. This article will cover the features of the wallet, its benefits, and what makes it a good choice for many users.

If you’re considering getting into Bitcoin or Ethereum but are hesitant because of security or accessibility concerns – this wallet might be just what you need!

What is a Coinbase wallet?

This is a digital wallet that Coinbase offers for storing your cryptocurrency. They are available in two types – Coinbase Wallet and Coinbase Vault.

The main difference between the two is that Coinbase Vaults have more security features. In contrast, Coinbase Wallets do not provide additional protection beyond what you expect from an online wallet. We will talk about both of these wallets in detail to help you decide which one suits your needs best. 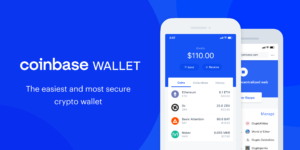 Is Coinbase wallet a good wallet?

Coinbase is one of the most popular wallets in the crypto world. Coinbase wallet review: Is Coinbase Wallet a good wallet? Coinbase has been operating since 2012 and has become one of the leading cryptocurrency exchanges worldwide.

Coinbase also operates Coinbase Wallet, which can be used as an online or offline wallet for storing Bitcoin, Ethereum, Litecoin, 0x (ZRX), and other cryptocurrencies. Here are some pros and cons to help you decide if Coinbase is right for you.

Read also: Best Crypto Wallets to Use and their Types

Coinbase is one of the most popular Bitcoin and cryptocurrency exchanges in the world. Coinbase has been around since 2012, so it’s been a while since they’ve had any significant hacks or security breaches.

Having gone through users reviews on forums and social media, I can say that the wallet is very secured and safe to store your coins if properly used.

What is the difference between Coinbase and Coinbase wallet?

Coinbase is a digital asset broker headquartered in San Francisco, California. Coinbase offers several services, including the Coinbase wallet, allowing users to store their Bitcoins on their computer or mobile device.

Coinbase also provides an exchange where traders can trade bitcoin for other cryptocurrencies such as Ethereum.

The company was founded by Brian Armstrong and Fred Ehrsam in 2012 and has raised $217 million from various investors, including Andreessen Horowitz, Union Square Ventures, Ribbit Capital, and The New York Stock Exchange (NYSE).

How to get a coinbase wallet

Coinbase is one of the easiest ways to buy and store Bitcoin, Ethereum, Litecoin, or Bitcoin Cash on your phone. Here’s how you can start using it today:

Can Coinbase wallet be hacked?

The wallet is a mobile cryptocurrency wallet that supports Bitcoin, Ethereum, and Litecoin. It’s well-designed and offers a lot of security features.

Coinbase offers some excellent security features in the form of 2FA (Two Factor Authentication), which requires not only your password but also an additional code sent to your phone or email address before you can log in.

In addition, Coinbase stores 98% of customer funds offline – away from hackers – on cold storage servers that are never connected to the internet for maximum protection.

It means customers don’t have to worry about their accounts being compromised if Coinbase’s systems are hacked like other wallets such as MyEtherWallet were last year.

Read also: Binance Vs Coinbase: Which is Better for You

The wallet is the most basic option for storing your cryptocurrency, but it doesn’t have excellent security features or support for more than one currency at once.

Coinbase Vault offers better security and supports multiple currencies, but it also costs more money to use per month because of its increased storage capacity.

If you are looking to store large amounts of Bitcoin on Coinbase, then this may be the best choice for you; however, if all you want to do is transfer small sums of money back and forth between different currencies, then using Coinbase wallet will be enough as long as it.

RECOMMENDED:   How to Add Liquidity to Your Token Using Uniswap and Pancakeswap

How long does it take to transfer from Coinbase to Coinbase wallet?

If you wonder how long it takes to transfer from Coinbase to your wallet, the answer is six days. It means that if you purchase cryptocurrency on Coinbase, you will not access the money for another six days.

The delay is because there are many steps involved in verifying transactions and transferring funds between accounts.

The wallet is a Bitcoin, Ethereum, and Litecoin cryptocurrency wallet. It’s the only crypto-currency marketplace with 100% uptime since it became operational in 2012 and has served over 10 million customers.

The company also operates GDAX, an online trading platform for blockchain assets, and provides API access to its suite of products for developers. Is the coinbase wallet good? Yes!

This app allows you to send, receive or request money from someone by scanning their QR code or tapping their phone number so they can quickly pay back that person who forgot their lunch money at home on the way out the door.