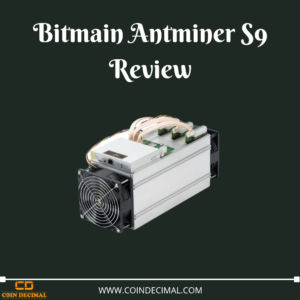 The Bitmain company was founded by Micree Zhan and Jihan Wu, who both had a focus of making money from mining.

What is Bitmain Antminer S9?

Bitmain Antminer S9 is the newest model of mining hardware that is strictly used in mining bitcoin and can operate without the need for a separate host computer. The new miner has an output of 14TH/s, making it the most powerful, effective and efficient bitcoin mining hardware on the planet.

How Does Antminer S9 Work?

The new S9 specifications detail that the miner processes the SHA – 256 algorithms (BTC and BCH) at 16 terahash per second. The miner takes 1280W from the wall which leads to delivering a power efficiency of 80 joules per terahash (J/TH). It also uses around 1,375W, running it will cost you network 15 and 30 cents per hour.

Pros and Cons of Antminer S9

It is quite expensive, sometime priced at $2100 and the user must resort to an additional power supply which is sold separately.

Where to Buy Antminer S9?

These mining hardware are usually sold and can be purchased online, below are the most effective, reliable and trustworthy place where you can get the latest Antminer mining model:

How Much Does Antminer S9 Cost?

Antminer S9 is the most expensive miner in the market today, because of its superior mining abilities and usually the price varies alot. On Bitmain’s official website, you can buy it for $2400 or at a similar price on Coin Miner. While on Amazon, you can get it at $2700 and on E-bay, you can get it for as little as $2000.

How Much Power Does an Antminer Use?

The mining machine is manufactured specifically to consume electrical power sufficiently, by using 1,350 Watts at 0.1 joules per gigahash. Comparing it with the previous model, it is 2.5 times more power efficient and consumes just 380w more.

Investing in a particular opportunity usually demands the knowledge of its profitability and in this case, it is the usage of Antminer S9 in mining bitcoin. Will using Antminer S9 give you the chance of making profit? Yes, it would but it entirely depends on:

However, the level of your profitability depends more on the availability of electricity to enable the mining hardware perform it’s activity.

Bitmain Antminer S9 is currently the best rated among all bitmain mining models, and it would enormously help to generate money by mining bitcoin more faster but at most, you need to consider the issue of electricity which is the main requirement for it to function and work well.

Once you are able to make electricity available, there is no doubt that you will make alot of profit, as it is the most powerful and efficient miner now.

Antminer is the most suitable and safe option for bitcoin mining and a more profitable way of turning your currencies to bitcoin.