After several years of development, Dogecoin has long become a well-known cryptocurrency and has a huge community of users around the world.

Compared with Bitcoin, the price of Dogecoin is very low, and it is very popular among retail investors.

Dogecoin is essentially a mockery of retail investors to institutions, and it is also a victory for the spirit of YOLO. Its return on investment even surpassed Bitcoin at one time

CCDOGE AirDrop is Coming! Don’t miss the next Shiba inu! 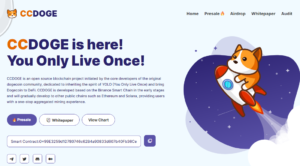 CCDOGE is an open source blockchain project initiated by the core developers of the original dogcoin community, and is the world’s first 3A type token with auto-farming, auto-market-maker and auto-deflation.

In order to incentivize early community supporters, we are officially launching the first round of airdrops!

CCDOGE claims to inherits the YOLO spirit of Dogecoin and is a 100% community-driven blockchain project.

Initiated by core developers from the dogecoin community, CCDOGE is developed based on the Binance Smart Chain.

Compared with dogecoin and Shiba inu, CCDOGE has limited total issuance and permanent deflation, supports autogain, and is a typical representative of third generation meme tokens.

Furthermore, holders of CCDOGE can participate in up to 300% lock-in mining.

CCDOGE is a typical representative of third generation of MeMe tokens. A 10% fee will be charged for each transaction (transfer, buy and sell). The fees will be distributed according to the following ratio.

Holders of CCDOGE will automatically receive earnings without complicated operations such as authorization or staking, and 2.5% of each transaction will be distributed to the token holders.

5% of the transaction fees will be automatically added to the liquidity, which can effectively increase the depth of the pool and reduce volatility.

CCDOGE is a continuously deflated token. 2.5% of every transaction fee will be automatically destroyed and destruction will stop when it reaches 50% of the total.

CCDOGE is developed based on BSC in the early stage, and will gradually support other public chains such as Ether and Solana in the future, eventually forming multi-chain support. Compared with other meme tokens, CCDOGE has obvious advantages, such as lower cost, automatic destruction, support for multiple chains, etc

3 thoughts on “CCDOGE Airdrop – How to Claim Free CCDOGE Tokens”